Stepping Into Your Courage

“Stepping Into Your Courage” is a collaborative magazine about sustainability. Not just environmental but something more nuanced, something that has many perspectives. It is not just about the how but also about how we see it – our mindset & attitude. Something that takes courage.

“Stepping Into Your Courage” is the work of a diverse, multicultural group, with varying professional backgrounds of which I had the honour to be part of. We are all clearly united on one thing – a shared concern for sustainable change.

It contains interviews with unique businesses that have taken years and a lot of courage, nerves, and commitment to build. Each contributor gets to explore their experiences and motivations around sustainability. The sole desire is to make a contribution to the conversation.  The magazine can be downloaded free – link at the end of this article.

How Did It Come About?

The magazine was a real collaborative effort. Shout out to The Do for providing the opportunity (an online course) in Spring 2020, from which the spark emerged.

One person ignited that spark, messaging all course participants, asking if people would be interested in creating “something” around sustainability. That “something” emerged as “Stepping Into Your Courage”.

Here are some short snippets to give you a taste!

Quote from the Foreword

The goal of life is to make your heartbeat match the beat of the universe,
to match your nature with Nature.

How does ‘creating change’ feel from within?

Vincent Stanley of Patagonia, in his interview made the point that when Patagonia made the decision to using organic cotton only, that no customer had in advance asked for the switch. As he said, this looked risky by ordinary standards. He did however go on to say that having courage based on values allows you see connections & possibilities that others are not seeing yet or perhaps afraid to see yet.

Stanley in concluding his interview made the key point that Patagonia asks itself is how it can give back more to the Planet than it is taking. Not a bad guideline for anyone to use – whether as a business, an individual or society in general.

What does it mean to swim against the business mainstream because genuinely the status quo does not work?

Andy Middleton of the TYF Group, (an outdoor adventure organisation based in Wales) found the scale of disconnection between work & meaning to be very large. This is in addition to his point that “the dire implications of working in an economy where four out of five people are not actively engaged in the work that they do”.

He talks about starting to work on questions around reconnecting people & purpose at work and the environment in ways that made sense in business.

They made the decision to fire their first corporate client because they increasingly felt very uncomfortable with the paradox of on the one hand working with individually great humans but humans working for a business involved in aerospace & weapons. Middleton felt that there is no point in saying that you have values but then not acting on them when faced with a paradox or conflict. But firing that client gave him & his colleagues greater courage & confidence to follow their own path.

Where and how does courage come into play?

Clare Hieatt, co-founder of Hiut Denim & The Do Lectures, in her Outro (as opposed to an Intro!) says that some people will be content to take the easy path through life. Sure, they may be moved by the climate crisis but because they see the problem as so big, do not necessarily feel the responsibility to do something about it.

Then there are others who deliberately seek a different route. The know it will be harder but still have the courage to take it on. At Hiut Denim & The Do Lectures they call this doing things the “long, hard stupid way.” You still do it knowing that will not be an easy journey, but you have the courage needed & the conviction that what you are doing is right.

She concludes by saying that rather than calling it the “long, hard stupid way”, it be renamed the “slow, courageous, beautiful” way.

I leave you with the table of contents to further whet your appetite. The download link is below. Enjoy! 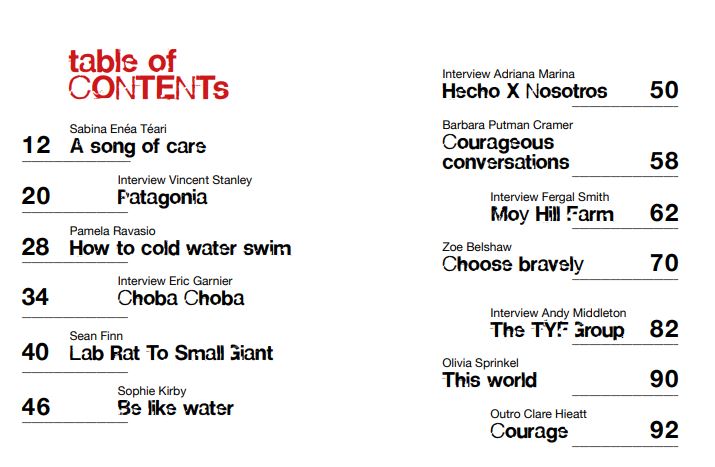